The Cardinality of Oil Cooler Gasket in a BMW 6 Series

Excellent performance and BMW’s go hand in hand. These European model vehicles are popular among people who want to enjoy high-quality rides while maintaining comfort and sleek elegance.

For this to be possible, BMW designers incorporated cutting-edge technology to ensure you continue to enjoy premium rides. So when your BMW develops oil cooler gasket issues, it is understandable to get frustrated.

Oil cooler gasket faults are particularly common in BMW 6 series. Let’s dive deeper into this valuable car component to understand why it’s such an important component in your driving experience.

The engine in your BMW 6 series needs to be at a certain temperature for it to run efficiently. If this temperature gets any higher than recommended, the engine will overheat and create even bigger problems.

For instance it’s not unheard of for an engine to overheat so much that it stalls completely. This is where the oil cooler gasket comes in. For the engine to remain within the recommended temperatures as it runs, oil needs to be cooled down in the cooling system.

This is what the coolant in your BMW 6 series does. The coolant passes through the engine to remove part of the heat that is produced as the fuel burns in the combustion chamber, leaving only enough heat to power the car.

Since the oil cooler gasket is made of rubber material, this component often wears out with continuous use. This wear is often as a result of the excessive expansion and contraction caused by the changes in the temperature as the engine runs. The rubber oil cooler gasket over time dries out, loses its elasticity and starts to crack. This as a result hampers the flow of proper oil temperature through the engine. In turn, the different parts in the engine that depend on this optimum temperature for lubrication end up grinding against each other, causing even bigger problems.

When the oil cooler gasket in your BMW develops faults, there will be significant changes in your driving experience. Below are some of the signs that you’ll need to keep an eye out for.

Bavarium Autoworks for your BMW 6 Series

If you’re in and around Cupertino, Palo Alto, 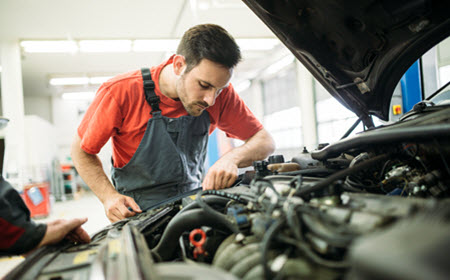 San Jose, Santa Clara, Saratoga, or Mountain View, California, reach out to Bavarium Autoworks today. We will get back on the road safely with confidence in your BMW again. Call us today.