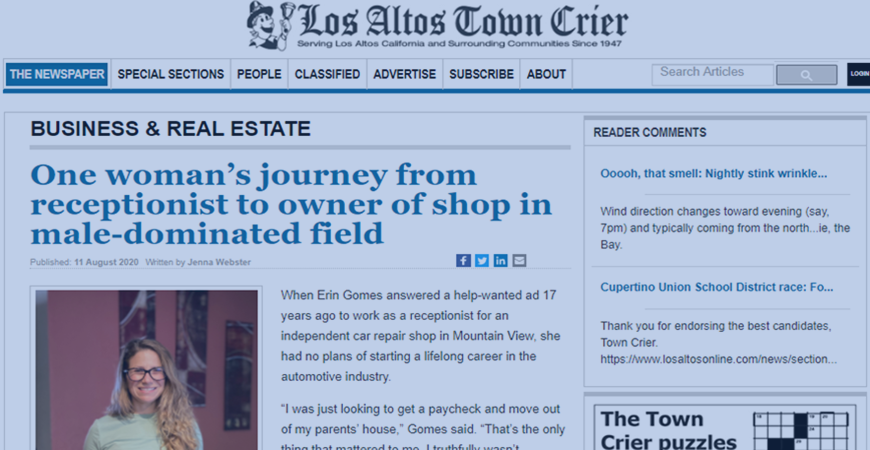 * This post was originally published in Los Altos Town Crier.

When Erin Gomes answered a help-wanted

ad 17 years ago to work as a receptionist for an independent car repair shop in Mountain View, she had no plans of starting a lifelong career in the automotive industry.

“I was just looking to get a paycheck and move out of my parents’ house,” Gomes said. “That’s the only thing that mattered to me. I truthfully wasn’t interested.”

But the ad posted by Dinan Engineering sparked her interest and was just the beginning of what would become a nearly two-decade career in the industry.

Gomes opened her own shop, Bavarium Autoworks, March 1 in Mountain View. She and her husband, Andy, purchased the shop, previously called CarBahn Autoworks, from Steve Dinan, who had hired her all those years ago.

Bavarium opened just two weeks before the shelter-in-place orders. The repair shop is considered an essential business, so it has remained open, but Gomes said it hasn’t been easy. She has a 6-year-old son who was finishing kindergarten virtually, as well as a 1-year-old daughter.

On top of her busy work and home life, she attempted to apply for several small-business loans but said she was denied with little to no explanation.

“The application process was daunting,” she said. “I have no experience with this because this is my first time owning a shop.”

Gomes added that she filled out two separate applications for an SBA loan. She received one response that said she provided insufficient documentation, but she was not told which paperwork was insufficient. She also attempted to apply for a Paycheck Protection Program loan through her bank but was denied because she didn’t have a business bank account as of Feb. 15. Gomes noted that she had tried to set up the bank account the first week of February, but she wasn’t able to because her business hadn’t been incorporated yet. The incorporation was complete Feb. 13, but she had to wait for the documents to be mailed to her, so consequently, she had to wait to open a bank account.

Bavarium is surviving without the loans, according to Gomes, but she and her husband have put a lot of their own money into the business.

“We have the lights on and I’m able to keep my employees, so that’s all our goal is,” she said.

LEARNING ON THE JOB

Gomes can relate to those employees after spending so many years as one herself. Before realizing she wanted to own a business, Gomes worked her way up from receptionist to accountant to service writer at Dinan prior to transitioning to the Stevens Creek BMW dealership. After six years at the dealership – during which she met her husband, who also worked there – Gomes returned to work for Dinan as a manager at CarBahn.

When Gomes started as a receptionist, she knew nothing about cars.

“Over time, just answering the phones and hearing the different questions and maybe not being able to find the person who has the answers … I would have to get the answers myself,” she said of how she familiarized herself with the business. “There’s definitely a learning curve with how you approach a customer with a repair and what to recommend and what’s more important – you know, this coolant or this oil leak, and which one is going to leave them stranded and which one they can put off for a year.”

Gomes added she’s learned how hard it is to be a business owner.

“It’s a lot easier to collect a paycheck and go home and not have to worry about your life on the line, in a way,” she said.

According to Gomes, another challenge she’s faced is being a woman in a male-dominated industry. She recalled being told she’s “front-office material only” and that she shouldn’t be dealing with cars because she’s not a man.

People have asked to speak with a man instead of her when she answers the phone.

“You have to prove yourself over and over and over, not only with customers, but with technicians and employees. They don’t trust that you can know what you’re talking about,” Gomes said. “Over time you become numb to it.”

She thinks it’s because people aren’t used to seeing a woman in this industry.

“I love when I go somewhere and I see a woman in the industry,” the shop owner said. “It’s very rare.”

Gomes’ advice to girls who are interested in working with cars: “Just do it.”

“Ask as many questions as you can if you don’t know the answer,” she advised. “Find out the answer and you learn from there.”

Call Now!
We use cookies to ensure that we give you the best experience on our website. If you continue to use this site we will assume that you are happy with it.Ok